It was hard to ignite a proper fire in the Damsted family’s fireplace. When it was lit up, the fire produced a lot of smoke inside the home. exodraft had the solution — a chimney fan that allows homeowners to ignite fireplace fires without odors or anything harmful lingering in the air. Chimney fans make fireplaces so safe, even kids and asthma sufferers won’t be the slightest bit uncomfortable.

The Damsted family bought a fireplace for their Odense, Denmark home. They desired a comfortable fire and natural heating within the household. The fireplace itself was fine, but it was the work to get the fire going that was troublesome. A short flue made lighting the fireplace a tough task. When a fire was ignited, it was difficult to keep it lit. Further, the fireplace produced many smoke particles in the room.
The Damsteds were frustrated with the effort it took to keep a fire burning. They were about to give up on the fireplace altogether when they learned about exodraft´s chimney fan, which ended up being the solution to the problem.

Simple regulation: Get the temperature you want

The chimney fan allowed the family to enjoy their fireplace and regulate their household temperature naturally. The chimney fan makes the fire easier to light and eliminates the need to open doors, windows, and other spaces to air out unwanted particles.
The heat within the household was comfortable for the entire family. Before the purchase of the chimney fan, the heat would get quite extreme once they were able to get a fire going. It is now much more regulated since the fireplace’s electronic control allows them to get the exact temperature they want. The chimney fan automatically modifies the ambient conditions. This allows for more efficient combustion and improved heating.

There was something more important than efficient combustion, improved heat, and better fuel economy for the Damsted family, something only the chimney fan they installed could provide:
The family’s youngest child suffers from asthma. Due to the bad combustion that used to linger in the household, she was often uncomfortable when a fire was lit. The chimney fan eliminates this negative aspect, and completely removes the particles. Besides the installation, no extra work was required to achieve such comfort.

Researched and approved by the Danish Technological Institute:

New research validated by the Danish Technological Institute reveals that a chimney fan installed above the fireplace eliminates 80% of the smoke particles that ordinarily would linger in the room. This is noteworthy for the interior atmosphere since the product ensures safety during fireplace use. Ultimately, a chimney fan has been shown to be one of the best solutions for fireplace smoke particle concerns. 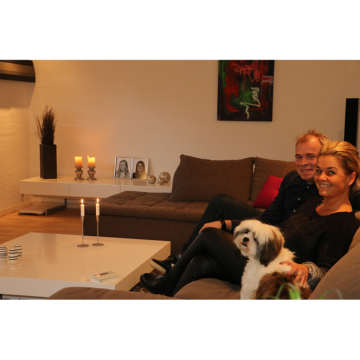