There are many apartments where stoves can’t be used due to insufficient draught.

Most people choose not to use their fireplaces or woodburning stoves since downdraught in their chimneys produces smelly smoke seeping through the room during refueling or lighting. Issues associated with not enough chimney draught can be bypassed with an exodraft chimney fan solution.

exodraft chimney fan solutions for venting of numerous fireplaces are comprised of an EBC24/10, a chimney fan, regular pressure regulation, and accessories.

The chimney pressure could be altered due to:

The control determines how fast the chimney fan operates so that sufficient chimney draught is provided.

The negative pressure created in the chimney makes sure that no foul odors or smoke seep through into other units if multiple stoves are lit.

This stops issues associated with soot and smoke smell in apartments, and as such, allows stoves to be used without restrictions. 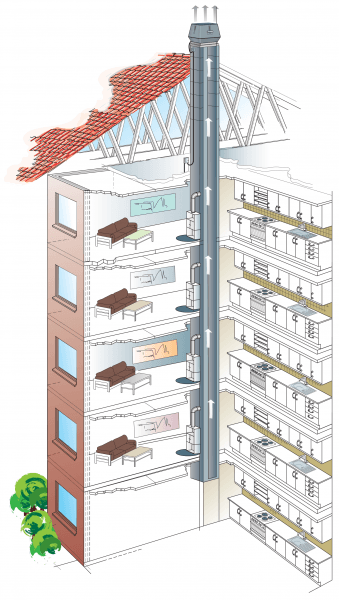